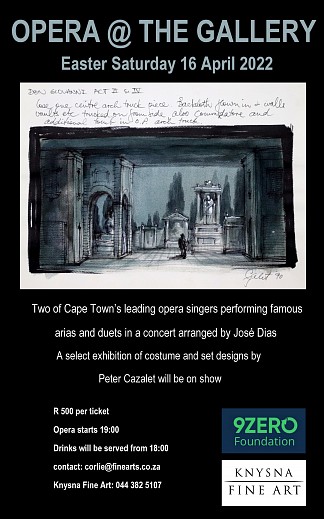 On the 16th of April Knysna Fine Art will be hosting an evening where two of Cape Town’s leading opera singers will be performing famous arias and duets in a concert arranged by Jose Dias.

A select exhibition of costume and set designs by Peter Cazalet will be on show.

Contact corlie@finearts.co.za for more information or call us on 0443825107

Portuguese-born José Dias is a regular presence in all major concert halls and arts festivals in South Africa. In recent seasons, international performances have taken him to Portugal, Mozambique, Israel, Switzerland, Belgium, Austria, including extensive tours of the Netherlands and Germany, with repeated appearances in such historic halls as the Berliner Philharmonie, Münchner Philharmonie, Beethovenhalle in Bonn, Baden-Baden Festspielhaus, among many others.

José is in high demand as soloist, chamber musician and vocal accompanist and coach, and has also been the musical director of Cape Town Opera’s internationally acclaimed touring productions African Angels and African Passion, as well as Biblioteek Productions’ operatic productions such as Poskantoor, La Voix Humaine and The Recycled Magic Flute. Recently he also wrote new music and took the musical direction of Piekniek by Mpande, a modern-day reimagining of the seminal Afrikaans protest cabaret Piekniek by Dingaan, as well as the 2019 Fleur du Cap Awards Ceremony, at the Artscape Opera House. These productions and his involvement therein, have made him the recipient of several awards, from festivals such as Woordfees, KKNK, Aardklop, as well as Fiësta and Fleur du Cap Awards.

He was co-creator and curator of the RISE concert series in collaboration with the Cape Philharmonic Orchestra - a platform for the display of young SA classical talent - and is also an avid supporter of contemporary music, having premiered several works by composers such as Arthur Feder, Braam du Toit, Hendrik Hofmeyr, Alexander Johnson, and Conrad Asman. Many of these (some written especially for him) have been recorded and are available on CD. 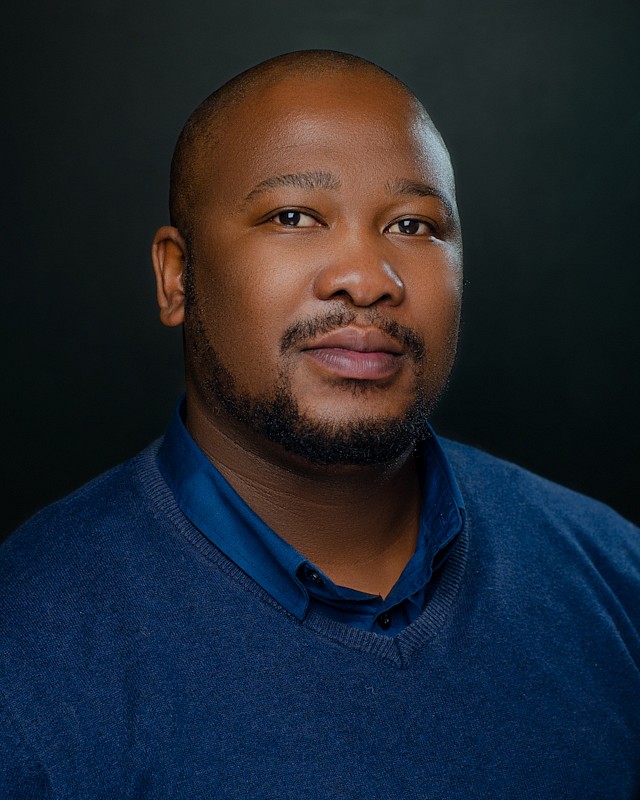 For the past few seasons, South African tenor Lukhanyo Moyake was a member of the Wiener Staatsoper ensemble, where he sang in numerous roles including Ismael in Verdi’s Nabucco, Arturo in Donizetti’s Lucia di lammermoor, and Naraboth in Strauss’ Salome. Lukhanyo graduated with a BMus degree from the University of KwaZulu-Natal, followed by post-graduate studies at the South African College of Music at UCT. He was awarded 3rd prize in the Neue Stimmen International Singing Competition in Germany and was a finalist in the International Hans Gabor Belvedere Competition. He is also the recipient of the Emmerich Smola Förderpreis of the SWR in Landau, Germany. He represented South Africa in the BBC Cardiff Singer of the World competition in 2017.

Lukhanyo was a member of the Cape Town Opera, where he has performed in numerous leading roles since joining the company as a Young Artist in 2010.

He has taken the stage in Cape Town countless roles, including those of Alfredo in Verdi’s La Traviata, Jaquino in Beethoven’s Fidelio, Belmonte in Mozart’s Die Entführung aus dem Serail, Leicester in Donizetti’s Maria Stuarda, Camille de Rosillon in Lehàr’s The Merry Widow, Rinuccio in Puccini’s Gianni Schicchi, Tom Rakewell in Stravinsky’s The Rake’s Progress, Steuermann in Wagner’s Der fliegende Holländer and the Duke in Verdi’s Rigoletto. He has appeared Sportin’ Life in CTO’s production of Gershwin’s Porgy and Bess on tour, at the Teatro Real, in Madrid and the Gran Teatre del Liceu, in Barcelona, as well as at the Teatro Colón in Buenos Aires.

In the 2017-18 season he made his debut with the English National Opera as Alfredo in a new production of La Traviata directed by Daniel Kramer. He also made his debut as Don José in Bizet’s Carmen in Braunschweig Staatstheater, in Teatro Nacional de São Carlos, in Lisbon. As soloist, he appeared with the Netherlands Radio Symphony Orchestra in Bernstein’s A White House Cantata, conducted by Wayne Marshall, and is to be seen regularly in orchestral concerts, recital and oratorio appearances. 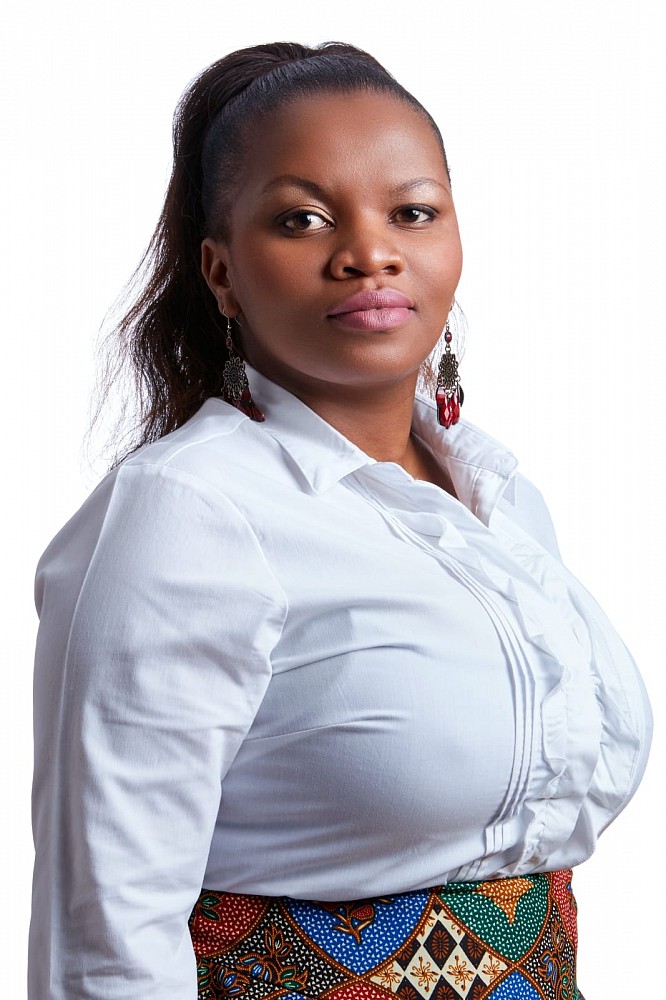 While at university she performed the roles: Anne truelove in Stravinsky’s The Rake’s progress, Countess Almaviva in Le nozze di Figaro, Saartjie in Hofmeyer’s opera about the life of Saartjie Baartman.

Siphamandla is a former staff soloist at the Cape Town Opera company where she performed the roles;

She was a finalist at the Hans Gabor Belvedere international singing competition, Lassoluta Virginia Zeani competition and Tbilisi Opera Crown Competition where she was awarded an engagement prize to perform at the Tbilisi Opera House where she later performed the role of Micaela in Bizet’s Carmen.

She appeared as the soprano soloist in a performance of Michael Tippett’s ‘A Child of Our Time’ presented by the Spanish TV-Radio Orchestra in Madrid.