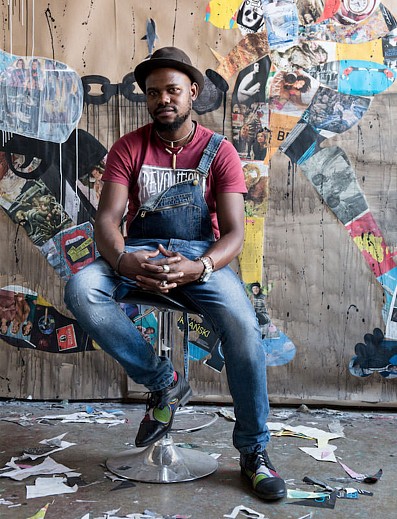 Blessing Ngobeni, an award winning thirty-four-year-old South African artist, is one of the country’s most exciting contemporary artists and who is receiving growing international attention. Ngobeni works primarily in mixed media, including paint and collage on canvas, to convey strong and challenging messages regarding the abuse of power, political consequences and socio-economic as well as environmental issues. Ngobeni’s works have been exhibited nationally and internationally, including London, Venice, San Francisco, Chicago and Miami in the United States, as well as Cape Town and Johannesburg in South Africa.

At the age of ten, after an abusive and turbulent early childhood in the small rural town of Tzaneen in Limpopo province, Ngobeni made his way to the Johannesburg slums where he lived on the streets and became involved in crime. He was arrested for armed robbery and in jail for six years. It was during this time behind bars that Ngobeni decided to change his life, and started making art, on his release from jail pursuing it on a professional level and rapidly becoming who many consider to be the most original and thought-provoking contemporary artist in South Africa.

It is Ngobeni’s past life and challenges that largely influence the subject matter of his works. He criticizes political organisations, making corruption and dishonesty amongst the ruling elite the leading themes in his art. He also confronts problems such as the Gini coefficient in South Africa, the country’s failure to learn from the past and the costs of breaking with democratic principles. Often compared to Jean-Michel Basquiat, Ngobeni explores and interprets the above topics through graphic, surreal and often disturbing imagery, with hard lines and distorted figures contrasting with vivid colours, forcing the viewer to confront uncomfortable truths. He is inspired by Surrealist imagery, the figurative violence of Neo-Expressionism and chaos of Dada, producing works that are powerful in their message but with a haunting aesthetic all of his own.

In a world where inequality, violence, climate change and greed are unfairly impacting the underprivileged, Ngobeni’s strident and often bitter denunciation of injustices are influential, valid and paradoxically healing. As John Butler once said, “Art changes people. People change the world.”