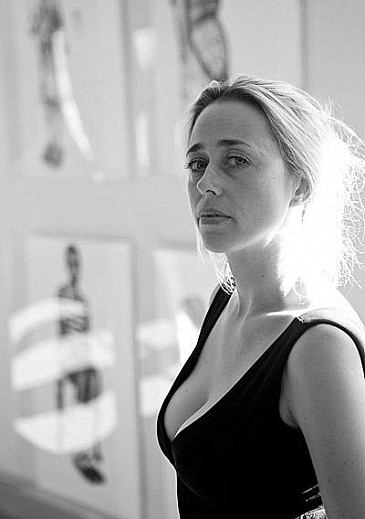 Libba Bray once said, “In each of us lie good and bad, light and dark, art and pain, choice and regret, cruelty and sacrifice. We’re each of us our own chiaroscuro, our own bit of illusion fighting to emerge into something solid, something real”.

Corlie de Kock is a South African artist whose mysterious and striking dark charcoal portraits have found a home in collections in both South Africa and abroad. She views art as a visual language – a form of communication between the viewer and the artwork. For de Kock, the process of creating an artwork is just as important as the final product, for the meaning is produced through experiencing various ideas and emotions as she changes and adds details to the picture along the way. Currently, she is very much interested in visual images as stories and how these stories are interpreted by the viewer, how the psychological state of the viewer impacts their interpretation of the artwork. The child residing within us all and the “becoming child” is an important theme in her work as well as space and landscape, which is interpreted within cultural rather than natural contexts.

In her most recent exhibition Chiaroscuro at Everard Read Franschhoek, de Kock explores female portraits within the South African landscape. Chiaroscuro is a technique historically used by Renaissance and Baroque painters by which light and shadow are used to create the illusion of illumination from a specific source shining on the figures and objects in a painting, creating a dramatic effect. But instead of using paint, de Kock uses charcoal to create an even more high contrasting dramatic atmosphere to her drawings. During her drawing process, de Kock draws the images and then erases and re-draws them, turning charcoal into a metaphor for temporality which in turn makes drawing a lively process which is ever-changing. Just like history passes, this drawing process links the artworks with the concept of value and the passing of time.

As for her subject matters, de Kock uses the historical employment of pictures during the colonial era in South Africa. Seventeenth century travelers in the Cape documented their experience in diaries. These were the first depictions of the African landscape, its natural phenomena, and its people. Later, these drawings as well as photographs of African women in postcard form became very popular in Europe. Ecofeminism is the fundamental theme in this exhibition, as de Kock uses the concept of gender in exploring the abuse of power over women and nature. The women depicted in her portraits are from Africa. Maps and globes within the drawings are symbols of how these women stand their ground in the world in which they find themselves. In her female portraits, de Kock emphasises the moment of a woman’s realisation of her own independence, reflective of that seen in Johannes Vermeer’s paintings during the Seventeenth century. With regards to landscape, de Kock references the ecological disaster in which many countries find themselves because of selfishness and exploitation of nature. With recurring draughts and water shortages, South Africa is one of these now suffering countries. But even though these conditions are dark and worrying, de Kock gives a beautiful romantic view of the landscape.

Everyone views things differently, and our beliefs influence how we interpret the world around us, with art being a big part of this world. Pictures have been used to achieve various aims over the years, from scientific studies to advertising a ‘new world’. What we put on paper impacts the person viewing it later, and how they think impacts the meaning of what is depicted on that paper, and so on. Art holds much power as it is a representation of how we see the world, or how we would like it to be seen, and Corlie tackles this concept with astounding precision in her works.