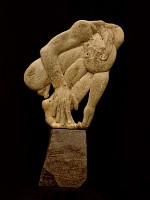 Born in Bristol, England in 1957 Carl Roberts’ life has been characterised by adventure. After the death of his father in a tragic aircraft accident, the family moved to Petrusburg. This little town consisted of a small convenience store, retired farmers … and a railway siding.

A second marriage saw the family move through a handful of towns in sub-Saharan Africa. When Carl’s second father died, a third marriage saw the family move to Tanzania before settling at last in East London . His childhood days were spent making clay pots and papier-mâché dragons. He failed matric and was kicked out of the family home. The closest place of employment was the fire station so he became a fireman. This was followed by a stint as an assistant in a dairy in Phalaborwa and a couple of years as a truck driver on the railways in Durban.

The idea of being a university drop-out appealed to Carl, who then bullied his way into Rhodes University. After dabbling in journalism and philosophy, he became a full-time Fine Art student. Finally, Carl was in a place that he loved. These studies gave him confidence and respect. He had found something that he enjoyed and was good at.

On completing his degree, and armed with the Purvis prize for the best all round 4th-year student, Carl was employed as a lecturer at various universities across South Africa. In 1993 he graduated with a master’s degree in Fine Art … and two years later Carl Roberts was a full-time artist.

Today, based in Hillcrest, Kwa-Zulu Natal, Carl spends his days doing what he loves to do most: make sculpture.

Carl’s pieces are Intellectually challenging, visually exciting, and made to last. They are on display in a number of public galleries. Carl’s works are collected by art collectors and investors from all over the world. His sculptures can be found around the world, including in:

“By the age of five, I had already experienced my share of catastrophes, and was already onto my third father. The first died when he crashed his RAF jet. The second died of lung cancer. We lived in many places – my elder sister has been in more schools than she’s spent years in school. Perhaps it is surprising I even got to my final year in school as I was emotionally unstable and intellectually disinterested. Add to that my ADD (attention deficit disorder), a little dyslexia – and never having art as a subject at school. Needless to say, I failed my finals.

I worked for five years before deciding to go to University to “fail”. I hoped for an exciting social life and the credibility of being a university drop out. The day before I left Durban for Rhodes University, I got a rejection note. With little to lose and my friends waiting to take me on a meandering trip down the Wild coast, I persisted.

To this day I am not certain if the university made a mistake with the admission criteria, or if I bullied my way into the university. The admission officer, flustered by my attack, allowed me to register for a Journalism degree with art as an extra credit.

That extra credit changed my life!

I switched to a degree in Fine Art – and failed to fail as I’d imagined I would. Much to my surprise, I was awarded the prize for the best all round art student, received academic half colours, and a Rhodes University bursary to further my studies. I went on to complete a Master’s degree and became a Fine Art lecturer. In 1995 I was pushed from my position as a lecturer at the University of Durban-Westville by a disgruntled and threatening student and inept management to become a full-time artist.

Today, I am grateful for that unfair and upsetting calamity.”